Discouraged that Moshiach has not Come?

In the following dialog JDM wrote that he has a friend, who is begining to become frum. He is concerned that she will burn out and become discouraged in Moshiach does not come soon.

JDM: We do have a guarantee from Hashem that Mashiach will come....but that assumes the belief in Hashem. I am sure that it can be proven, and I am not interested in getting into that kind of discussion (not now during finals!). Part of the problem is that my friend is getting discouraged, whether that is appropriate or not, that is the reality. That discouragement has led to doubts in Mashiach, which then link back to doubts of Hashem. Someone explained that there are things that we know and things that we believe. Mashiach is one that we believe. What is a belief? A belief is something that we can not prove until it happens. We believe in Techias Hameisim, and Mashiach, which means that until they happen we can not prove them. The only possible proof is that things are fulfilling prophecies, or that G-d has only fulfilled half of a promise so therefore he will fulfill the second half. These are all good answers, but it can still leave doubts unless a person decides to believe one way or the other. Take care.

There are lots of reasons for disapointment, discouragement, and despair in the world:

But because we have bitachon (trust) in the Eibishter (G-D) we do not allow these disappointments overcome us, and chas-v'sholem certainly not doubt in HaShem.

Now, with respect to your friend, I have said that I felt that the dissapointment was a sign of a positive healthy response, but let me be a bit more precise:

Chassidus explains that there are two types of dissapointment:

Merrirus is a healthy response to the disapointments of the world. We are bothered by our failures, bothered on Yom Kippur (or more frequently !) by our sins, upset at our lazyness, or at the stupidty and cruelty of the world. The fact that we have been a refusnik, slave, etc, for many years deeply hurts us. The question is what is our response. Merrirus is a healthy response. It is the bitterness that leads to action. We write letters about Soviet Jews, we make lists about how we are going to act better. We take stock of our faults, and make resolutions. 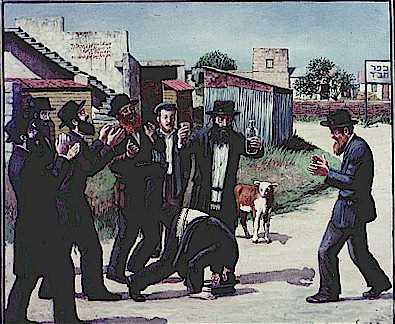 Aztvus on the other hand is closely connected (grammatically, and according to Chassidus) with Atzlus (lazyness) it is the sadness that leads to depression and inaction. It is the throwing up of one's hands, the lying under ones covers all day, and the doubting in the Eibishter. One gives up looking for job interviews, and walks around too depressed to take an active approach to tackling the problem.

Perhaps you can convey this approach to your friend. That there are two ways to RESPOND to the fact that Moshiach has not yet arrived. We don't stop saying the line in the Shemonah Esrah: "Lshuasecha, kvisi kol Hayom" we don't stop hoping for the comming of Moshiach. That is the atzvus (in the sense of abandonment) approach, which I have characterized as immature. Instead, the appropriate response is merrirus. A bitterness that leads to actions. Actions such as greater involvement in mitzvot, more involvement in dispelling misconceptions about Moshiach (through more publicity, by making oneself more knowledgable), more intention in one's davening and avodah.

If she would like, there is a four tape set that talks about Simcha, merrirus and atzvus available from MACHON CHANA tapes by Rabbi Majeski. These tapes deal in a very accesable way with how to deal with dissapointments, anger, etc. Machon Chana is a school for women baaley teshuva in Crown Heights, and from what you are saying it seems like this lecture series is geared exactly to womeon similiar to your friend. [Side issue: do women have more problems with depression and sadness?]